Questions about the Walton athletic program should first be directed to Mrs. Abby Eichelzer, Walton Athletic Department Secretary.  She can be reached at the following locations: 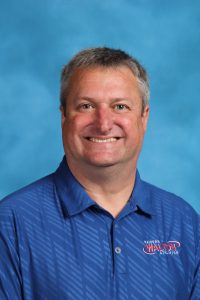 Chris Williams is in his 8th year as Athletic Director and 26th year as a part of the Walton Athletics family, serving in a variety of roles during that time.

For twelve seasons from 1995 to 2007, Coach Williams served as head coach of the Lady Raider basketball program.  During his tenure the Lady Raiders made it as far as the Elite Eight of the state tournament.  He also served as an assistant in the volleyball program for a total of thirteen seasons, helping the Lady Raiders to five consecutive State Championships from 1998-2002 and three straight from 2010-2012 as well as State Runner-up performances in 1997 and 2009 and a Final Four appearance in 1996.  His JV teams also experienced success, winning a total of seven Cobb County championships.

He earned a B.A. in English in 1990 and a M.Ed. in 1992 at the University of Florida as well as an Ed.S. from Lincoln Memorial University in 2006 and an Ed.D. from Walden University in 2011, both in Administrator Leadership.

Before becoming a teacher and coach, he played high school basketball for his father Mike at Dunedin High School in Dunedin, Florida from 1982-86.  Coach Williams is single and resides in Marietta.